A Bit of Wisdom from Alexis de Tocqueville

“Democracy extends the sphere of individual freedom, socialism restricts it. Democracy attaches all possible value to each man; socialism makes each man a mere agent, a mere number. Democracy and socialism have nothing in common but one word: equality. But notice the difference: while democracy seeks equality in liberty, socialism seeks equality in restraint and servitude.” ~ Alexis de Tocqueville 29 July 1805 – 16 April 1859

“Society will develop a new kind of servitude which covers the surface of society with a network of complicated rules, through which the most original minds and the most energetic characters cannot penetrate. It does not tyrannise but it compresses, enervates, extinguishes, and stupefies a people, till each nation is reduced to nothing better than a flock of timid and industrious animals, of which the government is the shepherd.” ~ Alexis de Tocqueville 29 July 1805 – 16 April 1859

“It’s not an endlessly expanding list of rights — the ‘right’ to education, the ‘right’ to health care, the ‘right’ to food and housing. That’s not freedom, that’s dependency. Those aren’t rights, those are the rations of slavery — hay and a barn for human cattle.” ~ Alexis de Tocqueville 29 July 1805 – 16 April 1859

“It is indeed difficult to imagine how men who have entirely renounced the habit of managing their own affairs could be successful in choosing those who ought to lead them. It is impossible to believe that a liberal, energetic, and wise government can ever emerge from the ballots of a nation of servants.” ~ Alexis de Tocqueville 29 July 1805 – 16 April 1859

“Tyranny in democratic republics does not proceed in the same way, however. It ignores the body and goes straight for the soul. The master no longer says: You will think as I do or die. He says: You are free not to think as I do. You may keep your life, your property, and everything else. But from this day forth you shall be as a stranger among us. You will retain your civic privileges, but they will be of no use to you. For if you seek the votes of your fellow citizens, they will withhold them, and if you seek only their esteem, they will feign to refuse even that. You will remain among men, but you will forfeit your rights to humanity. When you approach your fellow creatures, they will shun you as one who is impure. And even those who believe in your innocence will abandon you, lest they, too, be shunned in turn. Go in peace, I will not take your life, but the life I leave you with is worse than death.” ~ Alexis de Tocqueville 29 July 1805 – 16 April 1859 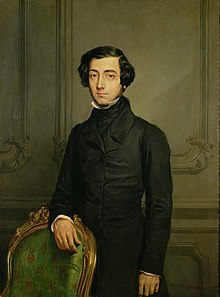 A Bit of Wisdom from Alexis de Tocqueville added by admin on July 29, 2022
View all posts by admin →