Indianapolis, IN…Marcus Ericsson won the 106th Indianapolis 500 presented by Gainbridge in a wild scramble after a late red flag Sunday at Indianapolis Motor Speedway, earning his first career victory in “The Greatest Spectacle in Racing.” 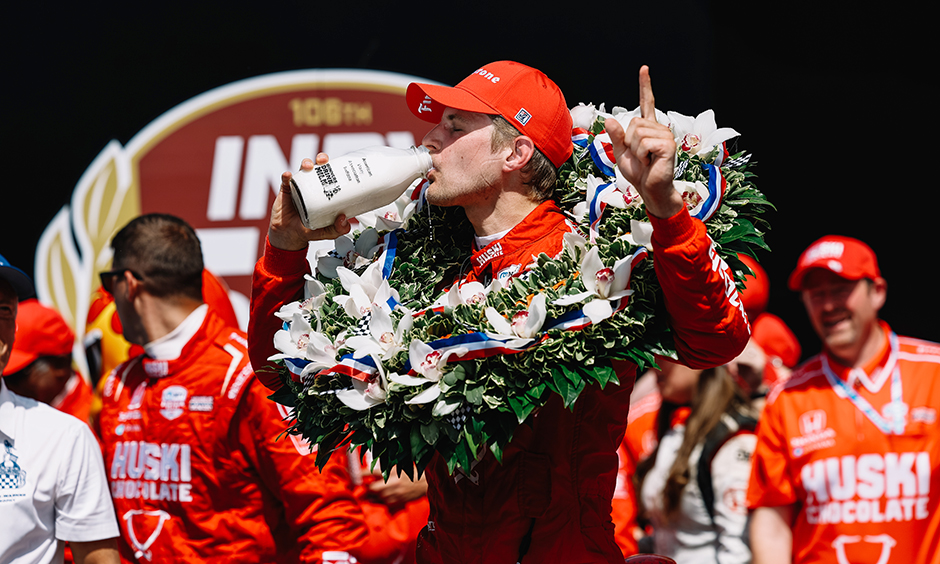 Ericsson, from Kumla, Sweden, won under caution in the No. 8 Huski Chocolate Chip Ganassi Racing Honda after Sage Karam crashed in Turn 2 on the final lap. Before the race-ending incident, Ericsson and Pato O’Ward were locked in a fantastic duel for the lead after the restart with two laps to go after the red flag, snaking around the 2.5-mile oval in one of the most breathtaking finishes in the century-plus history of the race.

O’Ward ended up second in the No. 5 Arrow McLaren SP Chevrolet in his best career “500” finish in three starts.

“I knew the Huski Chocolate car was fast enough, but it was still hard,” Ericsson said. “I had to do everything there at the end to keep him behind. I can’t believe it. I’m so happy.”

This was the first victory in “The Greatest Spectacle in Racing” for team owner Chip Ganassi since 2012 and his fifth as a solo owner and sixth overall.

Ericsson took the lead in the NTT INDYCAR SERIES standings with his third career victory, boosted by the double points awarded in this event. In a fateful twist, all three of his victories have featured red flags, as his wins in 2021 at Detroit and Nashville also included race stoppages.

2013 Indy 500 winner Tony Kanaan finished third in the No. 1 The American Legion Chip Ganassi Racing Honda, as the Ganassi team finished a dominant Month of May by putting two cars in the top three. Kanaan recorded the fifth top-three finish of his illustrious “500” career. Felix Rosenqvist placed fourth in the No. 7 Vuse Arrow McLaren SP, as Arrow McLaren SP placed two cars in the top four.

Alexander Rossi, winner of the 100th Indianapolis 500 in 2016, rounded out the top five in the No. 27 NAPA AUTO PARTS/AutoNation Honda after starting 20th.

2021 winner Helio Castroneves finished seventh after starting 27th in the No. 06 AutoNation/SiriusXM Honda, gaining the most positions from start to finish in the race.

Ericsson, who started fifth, took the lead for good on Lap 190 when “500” rookie Jimmie Johnson made his final pit stop out of sequence with the leaders. Ericsson led O’Ward by 3.2869 seconds and appeared to be on Easy Street toward a spot on the Borg-Warner Trophy with one of the largest gaps by a leader during the 200-lap race.

O’Ward chipped away over the next four laps, pulling to within 2.7 seconds. But it still looked like Ericsson just needed to keep his car in the racing groove for the win.

Then the script was flipped on Lap 194 when Johnson spun into the SAFER Barrier in Turn 2, triggering the fifth of six caution periods in the race. INDYCAR officials decided to red-flag the race in an attempt to finish under green, so all cars pulled into the pits for nearly eight minutes while the debris from Johnson’s crash was cleared.

“I couldn’t believe it,” Ericsson said of the red flag. “You can never take anything for granted, and obviously there were still laps to go, and I was praying so hard it was not going to be another yellow, but I knew there was probably going to be one. It was hard to refocus, but I knew the car was amazing.”

Green-flag racing resumed on Lap 199, with Ericsson snaking left and right on the front and back straightaway to try and break O’Ward’s aerodynamic tow. Heading toward the white flag, Ericsson dove toward the pit entrance and then back to the center of the racetrack, trying to break away from O’Ward.

The gap between the two was .0445 of a second at the flag stand with one lap to go, with O’Ward making a run toward the outside of Turn 1 on Lap 200. He pulled slightly ahead of Ericsson entering the corner, but Ericsson held the low line and forced O’Ward to lift the throttle.

“He was going to put me in the wall if I would have gone for it,” O’Ward said. “We were alongside each other. It’s frustrating. It’s bittersweet. I’m so proud, but it definitely stinks.”

Said Ericsson: “I was not going to put him in the wall, but he had to work hard to get around me there. I knew I could hold my line. I was going to go flat. He was going to have to go two-wide through (Turn) 1 to get there. I knew if I went on the inside into 1, I could keep my foot down. I was hoping I could keep my foot down. That was my plan. It worked.”

Ericsson started to pull away on the back straightaway after repulsing O’Ward, speeding toward Turn 3, when Karam crashed in Turn 2 in his No. 24 AES Indiana DRR Chevrolet. The fifth incident of the day in Turn 2, the race’s calamity corner, triggered the caution period that ended an event featuring a thrilling 38 lead changes among nine drivers.

NTT P1 Award winner and six-time NTT INDYCAR SERIES champion Scott Dixon appeared to be the driver to beat, as he led a race-high 95 laps and became the all-time lap leader in Indianapolis 500 history with 665, surpassing the record of 644 by legendary four-time winner Al Unser. But Dixon was assessed a speeding penalty entering pit lane after he stopped from the lead on Lap 175 in the No. 9 PNC Bank Chip Ganassi Racing Honda.

The subsequent drive-through penalty dropped 2008 Indy 500 winner Dixon through the field, and he ended up a disappointing 21st.

“It’s heartbreaking, to be honest,” Dixon said. “I came into the pit and had to lock the rears and kind of locked all four. I knew it was going to be close; I think it was a mile an hour over or something. Just frustrating. I just messed up.”

The next NTT INDYCAR SERIES race is the Chevrolet Detroit Grand Prix presented by Lear on Sunday, June 5 at the Raceway at Belle Isle Park in Detroit. The race will be broadcast live on USA Network and the INDYCAR Radio Network starting at 3 p.m. (ET).